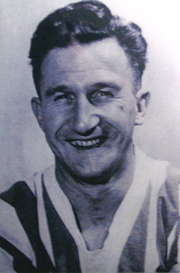 Roy “Buster” Cairns was born in the village of Clayburn, B.C. on Feb. 15, 1925. At school he played many sports including basketball and badminton, and he was also a gymnast and a Golden Gloves boxer. Cairns learned and played soccer on the local Fraser Valley fields in his youth and moved west in 1947 to play for Vancouver St. Andrews, the New Westminster Royals in 1948, Vancouver City in 1949, Vancouver St. Andrews in 1950, and again for the New Westminster Royals from 1951-1960.

Cairns, who played left back, was one of B.C.’s most decorated soccer players. His many accomplishments include winning five Dominion Championships (Challenge Trophy/Carling Cup) from 1950 to 1960 – one with Vancouver City in 1950 and four with the New Westminster Royals in 1953, 1955, 1958 and 1960. Cairns was a member of Canadas first FIFA World Cup team and played three times internationally for Canada, as well as being a perennial member of the B.C. All-Star teams. While captain of the New Westminster Royals in 1953, he led his team to the North American championship by defeating the Chicago Falcons.

Cairns was awarded the Vic E. Andrews Award as New Westminster’s athlete of the year in 1957, and he was inducted into the B.C. Soccer Hall of Fame in 2001. His peers described him as the best left back in the Pacific Coast League and Canada, and he was admired for his will to win, his amazing coolness and uncanny skill.

Upon his retirement, Cairns volunteered in the community of New Westminster at the police detachment’s Crime Prevention Division for over 20 years. In 1988, he was presented with a Certificate of Merit for his service to the community by Prime Minister Brian Mulroney. In 1999, at the 125th anniversary of the New Westminster Police Department, he was presented with an anniversary medal for his years of service.