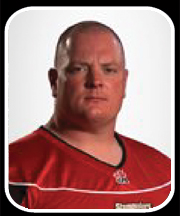 Rob Lazeo is inducted into the Abbotsford Sports Hall of Fame for his outstanding achievements in the sport of football.

Lazeo played at both Abbotsford Junior and Abbotsford Senior, and went on to play junior football for the Abbotsford Air Force. The offensive lineman received the Air Force graduate award in 1990 and continued his football career at Western Illinois University, receiving a full athletic scholarship.

Drafted in the first round of the 1995 CFL draft by the Saskatchewan Roughriders, Lazeo spent 14 years in the CFL (eight seasons with Saskatchewan, two with the Winnipeg Blue Bombers and four with the Calgary Stampeders). It was during his tenure with the Stampeders that he had his greatest success, both individually and team-wise.

Lazeo was the Stampeders’ nominee for CFL Offensive Lineman of the year, a 2008 West Division all-star at centre, and a 2008 Grey Cup champion. In 2011, he received the Calgary Stampeder President’s Ring Award, given to a player who demonstrates excellence and leadership both on and off the field (as voted by his teammates). Lazeo’s football pinnacle was when Calgary defeated the Montreal Alouettes 22-14 in the 96th Grey Cup game in Montreal.