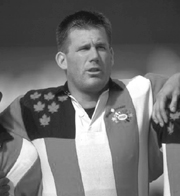 In high school at Yale Secondary and Abbotsford Senior, Mike Schmid excelled in a number of sports including his eventual choice, rugby.

Schmid went on to University of British Columbia where he became captain of the Thunderbirds men’s rugby team (1991-1994). A longtime member of the Abbotsford Rugby Club, he also earned many top finishes playing representative rugby. Schmid’s breakthrough year was 1988 when he captained the B.C. provincial team to a Canadian Championship – he was he first Abbotsford player to make a youth provincial team.

In the years that followed, Schmid represented Canada on the under-21 rugby team, the national sevens team and the senior men’s 15s team, playing in 24 international competitions.

His professional career started in education, teaching at Robert Batemen Secondary for two years, but his performance on the rugby field attracted the attention of the Rotherham Rugby Club in England. There, Schmid played over 100 games between 1997 and 2005, with highlights ranging from four National One league titles to a run of 27 unbeaten matches.

In 2002, Schmid began his coaching career, filling the role of assistant coach with Rugby Canada’s men’s team. He was recruited in 2005 by Esher Rugby Club in London, England, where he currently coaches and holds the position of Director of Rugby. Schmid had the rare ability to transition from player to coach very effectively, bringing early success to those under his tutelage.