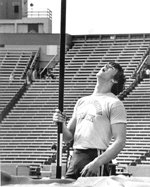 Kirk Bryde was brought up and attended school in Abbotsford, where he graduated from Abbotsford Senior Secondary in 1967.

Bryde was a true pioneer in the sport of pole vaulting, as he was the first vaulter in the Fraser Valley to use fiberglass poles. He was competing and accomplishing feats in the sport which very few had the ability or initiative to even attempt. He set several pole vaulting records during high school and went on to a scholarship at the University of Washington in Seattle where he continued to set records including British Commonwealth and Canadian marks. His Canadian record of 5.36 metres (17’6″) stood for 16 years. Bryde also competed at the Olympic Games in Munich in 1972.

After obtaining his business degree from the University of Washington and competing in the Olympics in 1972, Kirk continued to coach pole vaulting.