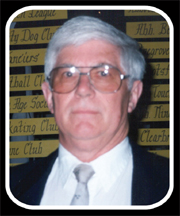 Ken Yates was the Parks and Recreation Director for the City of Abbotsford from 1977 to 2000, and during that time he contributed to the development of local sports and sports facilities both as an employee and as a volunteer.

It is often difficult to see the line between Yates’s work and volunteer activities, as he was involved in the community seven days a week in both capacities. The Fraser Valley Exhibition Park, Matsqui and Abbotsford Recreation Centres, Twisters Gym, the Air Cadet building, the skateboard park, the community mobile stage and the Abbotsford Judo Club facility – these are all legacies which Yates had a hand in building.

Yates’s first love was rugby both as a player then later serving in various administrative capacities such as manager of Team B.C. (nine years), manager of the Canadian national team, and secretary of the BC Rugby Union.

Over the years Yates has received numerous honours, including the Award of Merit from the BC Recreation and Parks Association and several awards from the B.C. rugby community.