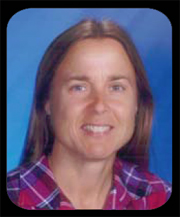 Diana Hambley, an Abbotsford Senior Secondary graduate in 1976, played many sports at an extremely high level. Her athletic drive continued after high school, as she went on to compete in both ladies and mixed competitions in sports such as tennis, softball, volleyball, golf, and others.

But not until 1984 did Hambley start playing racquetball at Abbotsford’s Valley Racquets Club. With her outstanding athletic ability and calmness under pressure, she soon started winning all the local tournaments in her division and then provincial titles.

By 1999, Hambley was the Canadian national racquetball champion in ladies singles and doubles. This was only the start of a series of national titles, including the 2003 Canadian singles, 2004 mixed A doubles, 2005 mixed doubles and women’s open, 2007 mixed elite doubles.

Hambley’s career in racquetball is definitely not over as the following list of 45-plus wins will attest: 2008 singles A, 2009 singles and mixed doubles, silver in women’s doubles, plus gold, silver and bronze in the world senior doubles 45-plus. She continues to compete and succeed in various ladies and mixed racquetball tournaments throughout B.C. and Washington.