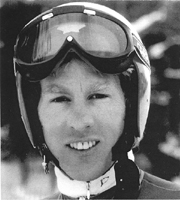 Dave Murray was on the Canadian national ski team for 10 years. He was one of the Crazy Canucks who took Europe by storm in the 1970s and brought attention to Canada’s national team with their fearless style of skiing.

Murray took up ski racing relatively late, at the age of 15. He earned three World Cup podium finishes including two second-place results behind fellow Crazy Canuck Ken Read. He peaked at No. 3 in the world downhill rankings in 1979, and posted a 10th-place finish at the 1980 Winter Olympics in Lake Placid, NY. He retired from competitive skiing in 1982.

Murray died far too early at the age of 37, but he accomplished a great deal in his short life. He left a lasting legacy in the Dave Murray Ski Camp and the Dave Murray Foundation that was formed in his honour. The foundation provides a bursary to a promising young skier each year. Murray received the John Semmelink award in 1978 and was inducted into the B.C. Sports Hall of Fame in 1987.