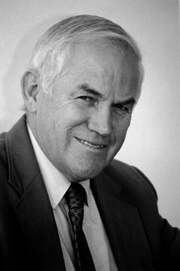 For over 50 years, Dave Kandal was a tireless worker on behalf of the community, whether it be as an athlete, as a coach, as a politician, or as a public appointee.

Kandal first etched his name in Abbotsford sport history in 1949 when he led Philip Sheffield School to its first and only appearance at the B.C. High School Basketball Tournament. His play earned him a position on the all-star team and started the path for a basketball scholarship at Pacific Lutheran University in Tacoma, Wash.

Kandal started his professional career as a teacher at the newly built Abbotsford Senior Secondary, where he coached the basketball team to its first B.C. High School Tournament. This 1957 team laid the foundation for many years of appearances by teams from the school at the provincial level.

Later, Kandal worked as a pilot for Air Canada and left the community until the 1960s. Upon his return, he worked with Jane Swan to organize an elementary school basketball league. As a school trustee for five years, then as Mayor of Matsqui, he was an active supporter of athletic events and the development of playing fields and facilities within the District of Matsqui. In 1998, Kandal was honoured with an elementary school named after him.