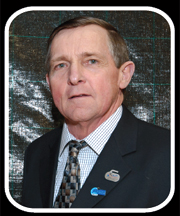 Daryl Kirton is inducted into the Abbotsford Sports Hall of Fame in the builder category for his contributions to the sport of curling.