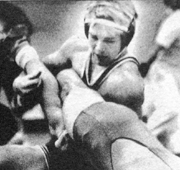 Cory Kwak was born and raised in Abbotsford, coming from a large, athletic family and acquiring his wrestling skills both naturally and out of necessity.

During that same period of time, Kwak was a member of the Canadian national wrestling team. Twice he was the national junior champion (under 20) and he was a five-time Canadian Open silver medalist. He has many championship titles to his credit including the 1993 and 1994 Clansmen International, the 1993 Commonwealth Games, the 1994 Francophone Games and the 1995 Canada Cup International.

Kwak has been a tremendous team leader with a passion for his sport and continues his athletic involvement as a coach and volunteer for soccer, hockey and wrestling. He and his wife are raising their family in Abbotsford where he is a career firefighter.