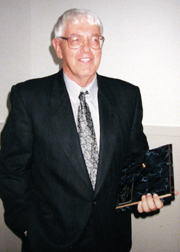 Barry Stewart is inducted into the Abbotsford Sports Hall of Fame in the category as a builder in both football and basketball. However, his contributions also include a role in volleyball, track and field, rugby and touch football and the many other sports that he has actively promoted in our community.

Stewart’s 40 years of activities include development, administration, coaching and refereeing. He has volunteered as a coach for numerous teams at secondary and elementary schools in Abbotsford including Abbotsford Senior, Abbotsford Junior and Middle Schools, St. John Brebeuf, Yale and Robert Bateman. For his efforts, he has been named a lifetime member of BC School Sports.

While coaching regional teams, Stewart has represented the area at the BC Games, Western Canada Games and the Canada Games. His guiding principle is the belief that every individual who wishes to participate in a sport, no matter what their level of expertise, should be given the opportunity to play. For years after his retirement, Stewart continued coaching and running camps in variety of sports.

According to Gerry Swan, “Barry always made a positive contribution to the lives of the kids he coached, and influenced them in a very positive manner.” After a lifetime of community volunteer service, who could ask for a better commendation.