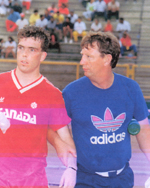 Barry Crocker has lived and breathed soccer his entire life. Growing up in the town of Lincoln in England, Crocker was a dedicated fan of London club Tottenham Hotspur and the local Grimsby Town Mariners. He was an accomplished soccer player in his youth, and served for 17 years in Britain’s Royal Air Force as a physiotherapist before moving to British Columbia.

Combining his passion for soccer with his physiotherapy skills, Crocker became the physiotherapist for the Vancouver Whitecaps and later for Canada’s men’s national team in the 1980s.

Crocker was involved with the Abbotsford Soccer Association for over two decades and served on the board in various capacities since 1990, mostly as general manager. He was the catalyst for the formation of the Abbotsford youth development program known as The Academy, which grew to include over 400 local players.

Abbotsford’s elite teams are known as the Mariners, and a highlight for Crocker was taking 12-year-old Canadian children on soccer tours to northwest England. Crocker’s programs have provided many young players the opportunity to win scholarships at prestigious universities in the U.S.A. and Canada. Under his direction, the local club has won many championships including back-to-back U18 boys national titles in 2002 and 2003.