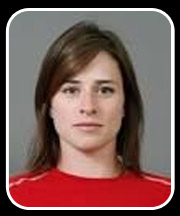 Gough tried skeleton for the first time in 2002 at a “Discover Skeleton” event at Canada Olympic Park in Calgary. That experience ignited a passion for the sport, and four years later, she was on Canada’s World Cup team, finishing seventh in the overall points standings. Gough spent the next two seasons predominantly on the Intercontinental Cup circuit (the second tier of international skeleton competition), winning three races in 2008-09. She was back on the World Cup Circuit in 2009-10, earning a silver medal at Park City, Utah along with three other top-10 finishes.

The signature moment of Gough’s career was making the Canadian team for the 2010 Vancouver Olympics. She gave her hometown fans a huge thrill by clocking the second-fastest time in the first of four Olympic runs at the Whistler Sliding Centre, trailing only eventual gold medalist Amy Williams of Great Britain. Gough ended up finishing seventh, just 0.65 seconds away from a podium spot. She completed two more World Cup campaigns – in 2010-11 she earned a trio of bronze medals to finish fifth in the overall world standings, and in 2011-12 she won her first World Cup race at Winterberg, Germany then added another bronze medal en route to a sixth-place overall finish.