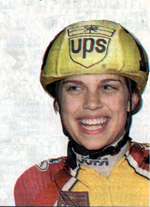 Alanna Kraus is a wonderful ambassador for Abbotsford, for British Columbia, and for Canada.

A short track speed skater since the age of four with the Matsqui Blades, Kraus joined the Canadian national team in 2000 and quickly established herself as a consistent performer in international events. She took home bronze in the 3,000-metre relay at that year’s World Championships and two years later had qualified for four events at the 2002 Winter Olympics at Salt Lake City, USA. The most notable of her finishes at the 2002 Games was a bronze medal in the 3,000m relay. Later that year, she earned another bronze medal at that year’s team competitions at the World Championships.

Kraus’s success continued over the next several years, with her most notable international results including bronze in the 1,500m event at the 2004 World Championships and in the team competitions at the 2005 Worlds. She qualified for two events at the 2006 Winter Olympics in Torino, Italy, placing ninth in the 500m individual event but earning a silver medal in the 3,000m relay.

Kraus’s relay team repeated their silver-medal feat at that year’s World Championships, in addition to taking bronze in the team competitions. She continued to compete internationally before retiring in 2008.