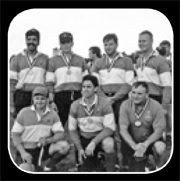 Although there were annual tug-of-war contests in the Abbotsford area, it wasn’t until 1991 when the Abbotsford-Matsqui Chamber of Commerce held a pre-Abbotsford Airshow event called Picnic in The Park that the sport taken seriously.

The Abbotsford/Matsqui Police Tug of War Team entered its first competition, and although beaten in the final by the Delta Police, the team showed promise and it was then decided to raise and train a competitive team.

The lightweight team was virtually unbeatable in police, fire and military competitions. From 1992 to 1997, they competed in 39 events against 141 teams and only lost 17 times, these occurring mostly in the early years of competition. The team won gold at the North West Police and Fire Games from 1993 to 1996 in Walla Walla (Wash.), Calgary, Portland, and Bellingham. This was overshadowed by international victories at the World Police and Fire Games, held in the United States (1993), Australia (1995) and Canada (1997).

The tug-of-war team disbanded in 1999 with the retirement of Pat McBride who trained and coached the team.